You are given a text with 11 missing words. The task is to add the missing words to the text. Unlike part four, no possible answers are given. The missing words are words like prepositions, auxiliary verbs, pronouns, conjunctions, etc. The first missing word is always given to you as an example.

You can download an example of Reading Part Five here.

Guide to the Task

Preparation and practice are essential for this part of the reading exam. It tests your grammar and your understanding of English sentence structure, as well as your vocabulary in terms of dependant prepositions (interested in for example), set phrases (not only…..but also for example, this one is very commonly tested in this part of the exam) and of course phrasal verbs (to find out about). 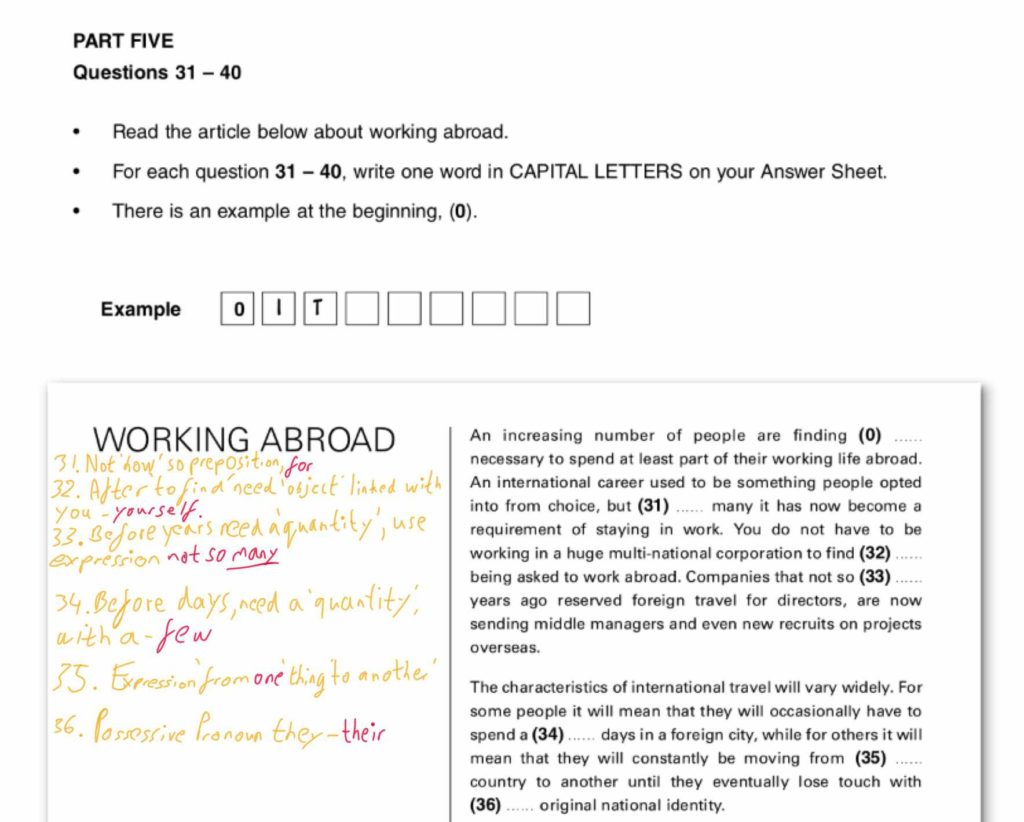 If you think the missing word is a preposition, whether it be part of a phrasal verb or dependant preposition and you do not know, then do not spend time trying to find an answer because it is extremely unlikely that you will be able to decide logically what the correct preposition is. Unfortunately the best technique is to write a common preposition and move on to the next question.

You are given a text which you have to read the text and decide if each line of the text contains an extra word. You must write the extra word in your Answer sheet, or write CORRECT if the line does not contain an extra word.

You can download an example of Reading Part Six here.

Guide to the Task

Unfortunately, there is no time-saving technique with this task. This task is grammar and vocabulary related and takes time and effort. The extra words are grammar words like past participles, prepositions, articles, pronouns (like it), conjunctions (like and or but) short adverbs (like so and yet) and negatives.

You can get 12 points here so it a good idea to concentrate hard and do it well.

This task is difficult because you have to check for words that are unnecessary in the sentence. You are not looking for wrong words or mistakes with the form of the word – that would be too easy!

For example, if the sentence was

The meeting lasted twenty minutes longer than planned so we was all late for lunch.

Most people would find it easy to see that we was is a mistake and it should say we were.

However, if the sentence was

The meeting lasted from twenty minutes longer than planned so we were all late for lunch.

Some people would not notice the “extra” word from. It is short, it is a preposition and it is often used with time, for example, the meeting lasted from 9 am to 11 pm. Cambridge is really testing both your proofreading skills and your grammar and vocabulary here.

You need to look for extra words in each line but also read to the end of the sentence which may continue to the next line because it might change the meaning.

You need to read carefully and in clause chunks – read pieces of the sentence which contain a subject verb and object to help you notice if there is an extra word. Just to check that you understand these grammar words.

A new manager joined the department.

For example with the short text below, it is better to read and check in chunks.

longer had her umbrella. || She put down her laptop in her bag || and stood up to look for it. || She bent

down to check under the seat || but could not see it. || She carefully looked for everywhere

|| but it was nowhere to be found.

Were you able to find any extra words? Remember to check for past participles, prepositions, articles etc.

Let’s do this together.

The hardworking businesswoman was been working on the train.

The subject part is fine, there are three verbs so that looks strange, the preposition on looks wrong – it is in the train surely (no, actually on is correct!) but remember that we are not looking for incorrect words. Look at the three verbs, working is the main verb, and was and been are the same verb, to be, so the problem is probably here. Which one is wrong? You don’t have to be a grammar expert here, just read the sentence in your head without one of the words. So the woman been working or was working. It is was working so been is the extra word.

when she noticed that

Now you need to check the next chunk. You can be confident that this is correct because you have already found an extra word but check anyway. That is not essential in the sentence but it is still correct.

she no longer had her umbrella.

Now you need to check the next chunk, not the next line, the whole chunk starting with the subject she. Well, there are no prepositions so perhaps it is correct. No longer might be new to you and might seem strange between the subject and the verb but the chunk looks correct.

She put down her laptop in her bag.

This chunk has three propositions, so concentrate on them. It is useful here to check the easy part first, in her bag. Yes, it is correct. Then check the verb-object part, put down her laptop. What does that mean? The simple answer is if, in the exam, if you don’t know what it means your best option is to say the wrong word is either down or in and read the sentence without each of the words.

She put down her laptop her bag

She put her laptop in her bag,

You should notice that the first one sounds strange without in. So down is the extra word.

and stood up to look for it.

Check this chunk too. And stood up is okay, you might think that the sentence should say stood up and looked for it, but that would be changing the grammar. So think about the meaning of to look, it explains why she stood up. To look for something, yes that is right. So down must be the extra word.

She bent down to check under the seat.

Down could be extra here, but it corresponds with under the seat. To explain why she bent down and under isn’t extra because she is looking under the seat, not on the seat.

but could not see it.

But and not correspond here so there is no extra negative and it is necessary because it refers to the umbrella.

She carefully looked for everywhere

Carefully is fine here and although it is not necessary for the sentence it is not extra. We have the verb look for again, and then everywhere. Wait a minute, there is no it after looked for, it should be there, like in the earlier part of the sentence. However, the exercise is to find extra words not missing words. So perhaps for is the extra word, she looked everywhere then. Yes, that works, the verb look often comes with a preposition but not always.

but it was nowhere to be found.

The first part looks fine, but what about to be found. The to is connected with be and it can’t be the word be either because found is not in the infinitive form, and without the verb find the sentence doesn’t work so the sentence is correct.

This may seem a very long time-consuming process but it is necessary and with practice becomes quite quick and natural. You will need to several practice tests to become good at this – you can choose a book full of practice tests here. 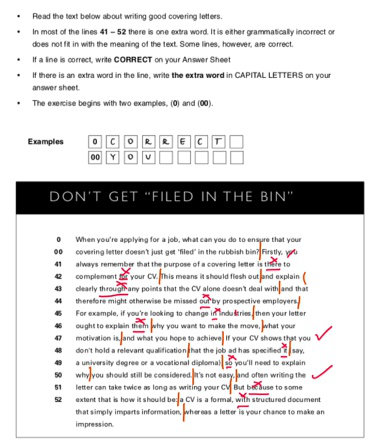 Now that you understand how to maximise your score for the C1 Higher Reading Test, you are now ready to start learning how to prepare to succeed in a different part of the C1 Higher exam then try Writing, Listening, or Speaking.